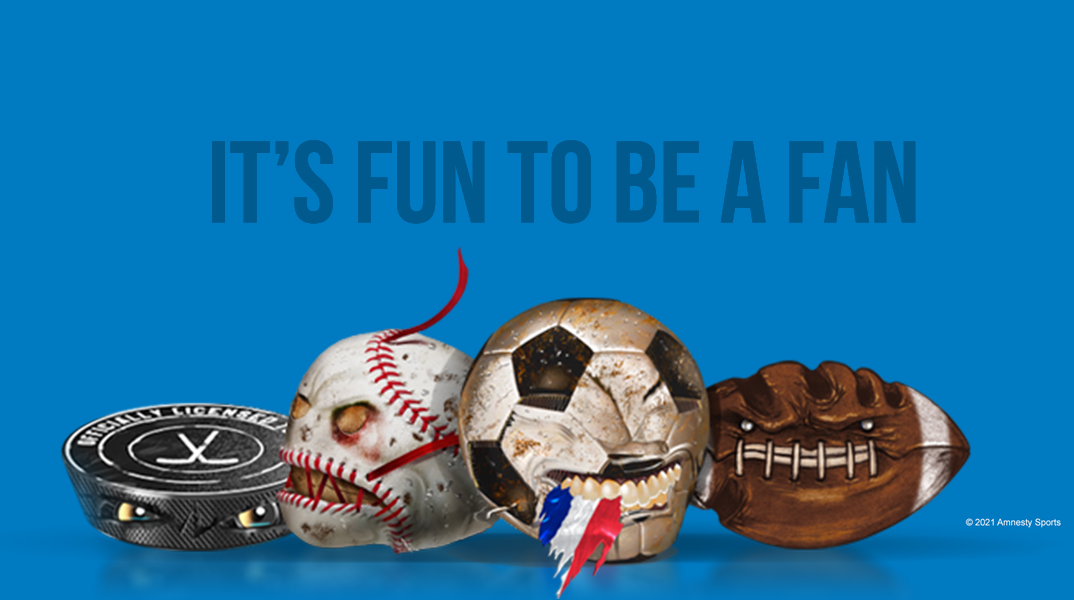 The mascots on you see on some Amnesty Sports T-Shirts are a group of lively and wacky sports-loving creatures that came to life during a freak accident in a sporting goods store in Brooklyn on a stormy day. A group of passionate, fanatical sports fans was on a field trip to the store, browsing the shelves and admiring the gear when suddenly, a bolt of lightning struck the building.

The passion and love for sports that the fans had were transferred to the sporting goods in the store, bringing them to life. From Walt Du Puck to Mel B. Ball, they all have unique personalities and stories. They all have a common goal, which is to spread their love for sports and their awe of great athletic feats to fans all over.

Walt Du Puck is a talking Canadian hockey puck that was brought to life by the love and passion of hockey. He's a real rink rat and loves nothing more than to be in the middle of the action, feeling the thrill of the game and the rush of adrenaline as the players chase him around the ice. He's a huge fan of hat tricks, and if he could high-five, he would do it every time one happens on the ice.

W. D. Puck is also a big fan of some of the hockey legends, like Wayne Gretzky, Mario Lemieux, and Sidney Crosby. He spends his days skating around the arena, showing off his skills and always ready for the next face-off. Despite being just a puck, Walt has a big heart and a love for the game that is unmatched. He's a beloved member of the hockey community and always ready to drop some hockey puns.

Mel B. Ball is a talking baseball from the Bronx, who's known for his fiery temper and love for the game of baseball. He's an expert in home runs and curveballs and has a particular love for one team that plays in the big apple, where he's a fan favorite. He's known for his fierce determination on the field, and his ability to intimidate the opposing team with his trash talk and intimidating glare. He's a fierce competitor, never backing down from a challenge and always pushing himself to be the best. Mel is a bit of a hothead off the field, but deep down, he's all heart. He's a true lover of the game, always studying film, trying to find new ways to improve his skills, and studying the opposing team's weaknesses. He's a beloved member of the baseball community and a true fan of his team.

This original New York baseball T-Shirt was designed for fans of all ages. Each shirt is digitally printed for color vibrancy and comes in sizes for every fan in your family or crew.

Mel B. Ball’s antics can be seen on his YouTube series "Sports Balls." One of his most popular episodes features his run-ins with bats. In the episode, Mel B. Ball recounts his past experiences with bats, from getting smacked by them during a game. "Sports Balls" is a YouTube series featuring Mel B. Ball, a talking baseball from the Bronx, as he sits down with other sporting goods and discusses amazing sports feats. Each episode is filled with humor, sports knowledge, and unique perspectives on the games they love.

Frankie "Fumbles" Ball is a talking football who loves throwing perfect spirals and doing wacky endzone celebrations. He's got a unique handprint mark on his face, which is a badge of honor from all the great quarterbacks who threw with him like Joe Montana, Tom Brady, and Brett Favre. After a long career, he retired and now enjoys striking a pose for Amnesty Sports T-Shirts designs, spreading a message of peace and unity in the sports community. He's known for his love of the game, his unique mark, and his ability to make any celebration a comedy show.

"Fumbles" got his nickname due to his occasional fumble during the games, but he always came back strong. He eventually improved his game and the nickname stuck. He embraced it as a reminder of where he came from and how far he had come. and now it's a symbol of his determination and resilience. He became a fan favorite, a symbol of resilience, and living proof that even if you fumble, you can still be a winner.

Meet Felipe F. Ball, the talking soccer ball from Barcelona. He's got big teeth and a big attitude, but don't let that fool you. He loves nothing more than scoring goals, making assists, and eating the opposing team's flags and jerseys. He's a fierce competitor on the field, but off the field, he's all about spreading the message of unity through sports. Just don't get on his bad side, or he'll sink his teeth into your team's colors.

At the World Cup in Qatar, Felipe F. Ball had a ball (literally). He was representing his nation, scoring goals, making assists, and eating the opposing team's flags. He quickly became a fan favorite, and even won the Golden Ball for best player of the tournament. Plus, he got to take home all the flags of the teams he played against as a tasty souvenir.